Galls on leaves, both as yet unidentified!

They say* that it’s been a mild winter so far, warm even. And whilst I suppose I can’t dispute that, it hasn’t been quite consistently warm enough to prevent the necessity of scraping the car in the frozen murk of 7am on a Monday morning. When I can’t feel my fingers and there is a fragile smear of ice crystals even on the inside of the windscreen, I almost sympathise with those scientific illiterates who are ready to dismiss the notion of global ‘warming’ at the first whiff of snow. “Mild winter?!”, I exclaim, shivering. “What mild winter?!”

Presuming that they lack the capacity even for unreasoned thought, the insects know better than I. For whilst the weather is, with some notable flood-related exceptions, for the most part a matter of inconvenience for us, for our invertebrate friends it is the difference between thriving and annihilation. This year they seem to be tending toward the former, provided most have been able to ride out the floods. In Reading, at least, even a few bumblebee colonies, grateful for the exotic winter blooms laid on for them by the university grounds staff, are keeping busy, even through the darkest months. The first speckled wood of spring was seen days ago, and I daresay other butterflies are emerging from their slumber in good numbers. Every passing moment of warm sunlight is snatched upon by small delicate flies, which leap out to join the jostling ranks of rival males in midwinter leks.

END_OF_DOCUMENT_TOKEN_TO_BE_REPLACED 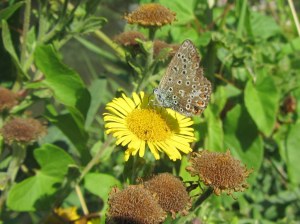 Plenty of 2nd generation common blues are on the wing.

I’ve only witnessed a few tens of examples, thus far, but I begin to suspect the great annual cycle of seasons contains a good measure more overlap than I’d been led to believe. Spring, as bird-listeners will know, often starts early in the New Year, as thrushes begin once again to mark the start and end of each day. But mini-springs can happen any time, whether it’s the soft sunshine of a late afternoon in December enticing an early great tit into see-sawing song; or a crisp, bright, September morning that’s suffused with the lilting refrains of freshly moulted chiffchaffs, as I witnessed yesterday.

Properly hot, incandescent summer days often appear in late March and can crop up well into October. And that’s well beyond the start of autumn, which gets underway as early as July, perhaps even late June, when the earliest returning waders pass through on their trek from the Arctic to Africa. And can it ever be said to end? The odd sickly tree may cling on to a few brown, withered leaves through to the following summer, perhaps only to shed them in a sudden squall, a vague hint of woodsmoke lingering on the breeze as they whirl away.

Dark, dank days of bracing winds and scudding clouds – the archetypal elements of an Atlantic winter – are equally capable of occurring at any time of year, as all long-suffering residents of these islands know. But putting the unpredictability of the British climate to one side for now, it’s fair to say that the tilt of this particular year is now pointing firmly toward autumn. The ship of summer has finally hit the rocks.

That said, its precious cargo has not been lost. It has merely been scattered and then concentrated into berries, nuts, fungi and seeds galore, plus late-blooming flowers too, all flourishing at last after a whole season of unusually reliable sunshine (unusual for the last half decade, at least). Wherever these are concentrated creatures gather, of all shapes, sizes and classifications, gorging themselves on the rich food as if it is all too good to last. Find a good patch of ivy flowers or a heap of rotting, windfall fruit, and you’ll see what I mean. 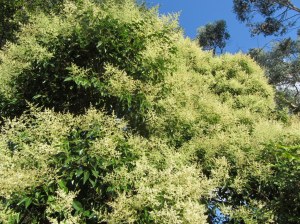 The animals are absolutely right, of course, in that such bounty never lasts, and I’m left pondering what it is I should be seeking to salvage from summer’s wreckage – especially thinking as a naturalist with a penchant for drawing up lists. Fully one-third of the year still lies before us, but as the dark begins to gather I already find myself thinking of the butterflies I’ve missed (whither the small copper?!), insect groups I’ve neglected, plants that remain a mystery, and migrant birds that it would seem polite to catch up with before they flee south.

For whilst year-listing may be a seemingly pointless, artificial practice, it is not based on an arbitrary time period. The birds, bugs and bees are governed just as much – if not more so – by the rhythm of the sun as our calendar is. In this way, at least to my mind, keeping a twelve-monthly tally encourages the naturalist to seek as diverse an array of experiences, and species, as possible. And it helps to ensure our recording effort spreads out into less well travelled corners of the year.

Indeed, there’s plenty of wildlife about now which will have been difficult or impossible to spot thus far, from dapper, peachy-necked, juvenile curlew sandpipers – surely amongst the prettiest of waders – to ivy bees making their nest in a sand bank. So in between making much needed renovations to my dilapidated wildlife spreadsheets, I vow to make the most of what is actually my favourite season. A season in which there is much to be discovered, even beyond the obvious delights of autumnal birding (when we say fall, we’re not thinking of leaves – or radiation!). Whether or not you are also in the habit of geeky list-keeping, I hope you’ll join me.

I’m a birder. Birds are the creatures of which I am most fond: that much must be evident from the name of this blog. But the most astonishing encounter with a wild creature that I’ve ever had was not with a bird, but with that most enigmatic and magnificent of British butterflies, the Purple Emperor. I found Him – or should I say, He found me, on an obscure track along the edge of an obscure block of woodland in an obscure corner of North-East Hampshire.

I was trudging wearily back to my car after some hours digging pitfall traps (a part of my MSc project research the summer before last), when I saw a huge butterfly winging purposefully towards me at head height above the track. It made a couple of passes, swooping closer each time, in an almost aggressive display of powerful, controlled flight, before settling on the track a matter of inches from my boots, wings closed.

I scrambled around in my mind, trying to recall what this impressive, beautifully patterned animal could be. I was only beginning to properly learn the butterflies at the time, and the flypast had so taken me aback that I don’t recall noticing any tell-tale hint of royal colouring. But all uncertainty was dispelled as my eyes were opened by a blast of purple; the transformed spectrum of a shaft of sunlight reflecting off the now likewise opened wings of the butterfly.