The river level has dropped but the floods remain. The field I wrote about last week has since hosted five wigeon, in addition to the gadwall and gulls that are still present, and a growing number of little egrets, 10 at my last count on Saturday. A fine thing to see, yet still I had already begun to find the bird-mania of my last post subside as the busy-ness of a new university term took its place. So, later that day, instead of tearing off after more birds, I took a short but more focused walk around our garden, with a mind to finding my first ground beetle of the year. I inherited the mantle of ‘recording scheme organiser’ for this group last year, so I figured it was time I started generating some records of my own again to set a good example!

For about the first two years we lived here I maintained several pitfall traps in the garden, to help build up a list of the species that inhabit the place we’re responsible for looking after. The traps are just plastic cups buried in the ground with a few bits of leaf litter or moss in the bottom as cover for whatever falls in. The most successful of them was in what I grandly like to call the ‘woodland’ at the far end of the garden, close to the K&A canal, in the shade of a large ash tree. In a week or so it invariably caught at least a few rove beetles or ground beetles, among the springtails, spiders and increasingly ubiquitous landhoppers, even in the middle of winter. As with any mode of trapping, it was like a mini entomological Christmas every time I checked the traps; I never quite knew what would turn up.

A species I enjoyed seeing regularly was Asaphidion curtum, a small (4–5 mm) beetle with a bronze-gold metallic sheen. It is said to prefer heavier, moist soils. Well, the soil in that part of the garden is certainly that now, sitting as it does under several inches of water. Luckily, I haven’t set the traps in over a year, so no beetles will have been drowned by my recording efforts at least, but it does raise questions about the impact of floods on invertebrate life. Many species of damp places must be able to escape or cope with inundation, or at least have populations resilient enough to bounce back after local losses. Where my local Asaphidion population resides at the moment, I’m not sure.

I did check under an old bin lid close to the limits of the groundwater flood in the garden. No Asaphidion, which I think would prefer to be among leaf litter, but immediately on lifting it I noticed two beetles sculling off into wet mud the consistency of thick icing. I plucked one out of the ooze, holding it between thumb and forefinger. A square-headed, blunt-jawed bruiser of a beetle, revealed as the mud sloughed off to have a bright orange thorax as well as a distinctive orange pattern on its wing cases. I had my first ground beetle of the year. Badister bullatus is a common species but no less beautiful for it, and apparently one that, like Flanders and Swans’ hippopotamus, is most happy when wallowing in glorious mud. Or, at least, it can survive those conditions if it must – lucky beetles: if the rain continues in this vein, mud will be all that is left of our garden.

When I started this blog it was very much about birds and birdwatching. There’s a big clue in the name. I was – and remain – a birder, but it is fair to say that recently I have not been birding with quite the fervour that I did in the early part of what is apparently now the last decade. I may simply have forgotten the sheer joy, the uncomplicated pleasure of watching birds. I may have been distracted by delving into other taxa, the endless further avenues of enquiry offered by the natural world, and indeed if I were starting this blog again in January 2020 rather than 2011 it might well have been called “Considering Beetles”. Or perhaps birdwatching has become too complicated. Is twitching fun or basically evil? Within what radius from home is it acceptable? Should all our birding be zero-carbon? If looking at a bird doesn’t render us instantly cheerful – nature cure! – are we doing it wrong? Is it possible to enjoy looking at wildlife when everything is basically doomed?

Coincidentally, somebody remarked to me today that they were enjoying Isabella Tree’s Wilding because here at last was an actual conservation book in the nature section, rather than being yet another ‘I went outside and saw / didn’t see a bird’ narrative. I understand where they were coming from and share an occasional weariness at the ever-expanding number of samey-looking nature titles on offer. Yet I also know that I quite enjoy reading ‘I saw / didn’t see a bird’ books, that in fact I’ve read some exceptionally good ones, and might even harbour ambitions to write one or two of my own. I think there might be a few books they’ve missed too, and conservation stories lurking in plain sight behind ‘I saw a…’ frameworks, but perhaps this is a discussion for another day.

Yes, we live in a fearsomely complex world. A world that sometimes seems to be unravelling so quickly that fear might be the only available response. But if we live mired in fear and complexity, overthinking every angle and every possibility, we wind up spending the days remaining to us in this world agonising over existence without ever getting on with it. So, despite my hesitation to arbitrarily make a life change right now just because the calendar has hit January, I’m resolving this year to be a simple birder again. To walk in our garden and by the canal, river and marsh nearby, on the campus where I work, to enjoy just watching birds. To build a year list because I enjoy the challenge. Some twitching permitted if I feel like it because very occasionally I do enjoy the chase, but nothing too daft – by bike, train or shared lift in almost every case (but let’s not overcomplicate matters with too many rules).

In reconnecting with the hobby through which I became a nature-centred person, perhaps I’ll find new enthusiasm for the other natural history pursuits that theoretically I enjoy but in practice don’t give enough time to. I might write a few more ‘I saw’ blogs, with no particular expectation that they’ll have an audience. Getting into the practice of writing again may enable me to collect, in an unforced way, some of the more complicated thoughts lurking at the back of my mind into something cohesive and, who knows, possibly publishable. And in among all that, I might just be refreshed enough to live better in this difficult world, and face it with a little more hope than I’ve been able to muster of late. 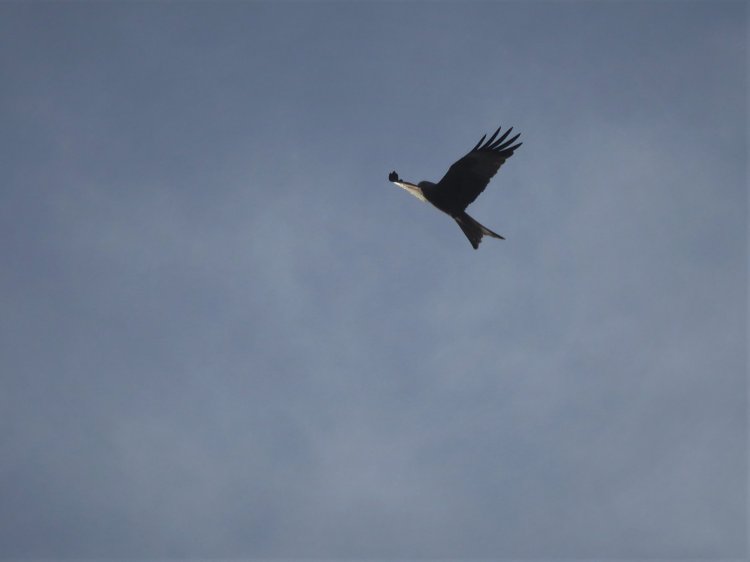 We live about a metre or two above the Kennet. Following a series of heavy rains, the fact that we live on a floodplain has been evident like no other period since we moved here. Our neighbours often talk about the winter of 2013, when the back gardens of our terrace, which lead down to the canal, were underwater for months and frequented by happily swimming mallards. Every year since we’ve lived here must have been relatively dry by comparison, but now the groundwater has risen and the end of our garden is close to impassable. One thing we have discovered is that our garden is slightly higher than those on either side, which are more extensively flooded by deeper water.

The water level in the canal is controlled, I think, but has been allowed to rise very high, presumably to take flow out of the river. The Kennet has spilled modestly over its banks in our local park, engulfing a handsome weeping willow, some streamside alders and part of a small meadow. Meanwhile, some impressive expanses of water have appeared on floodplain fields, including part of the local park immediately north of the river. Here a deep flood is feeding startling volumes of water speeding through what used to be a shallow stream. The same ditch where I marvelled at snow drifts during the Beast from the East and found horseradish growing wild one May is now full of turbulent white water and has become something of a local tourist attraction.

One large canalside field, just west of the disused Lambourn valley railway, is now to all appearances a sizeable lake. It appears in Natural England’s priority habitat inventory as ‘floodplain grazing marsh’, but while I have seen it grazed frequently in the past this is the first time I’ve seen so much wildlife in it. Flocks of bright white gulls, gathering noisily at dusk to roost, have replaced the usual sheep. Ducks welcome the new watery expanse, including species such as gadwall and pintail, which I don’t usually see so close to home. These are a real treat – the charmingly understated gadwall, with its nasal quack, has long been a favourite of mine, while a male pintail with his chocolate brown head and cream neck stripe is probably the most snappily dressed of all our overwintering duck species.

A smaller wet field on the other side of the railway embankment, always marshy, is now also mostly underwater. Appropriately enough, a water rail called sharply into the near-dusk as we passed it yesterday on our afternoon constitutional, while a marsh tit* sneezed emphatically somewhere in the tangle of flooded scrubby woodland beyond. This morning I saw, for the first time since moving here, a water vole swimming across the canal. There’s no reason why high water levels would particularly suit them (as far as I know), but this fortuitous sighting seems a good symbol of the wild nature of this river valley, so long constrained by human needs for predictability and security**, beginning to reassert itself. 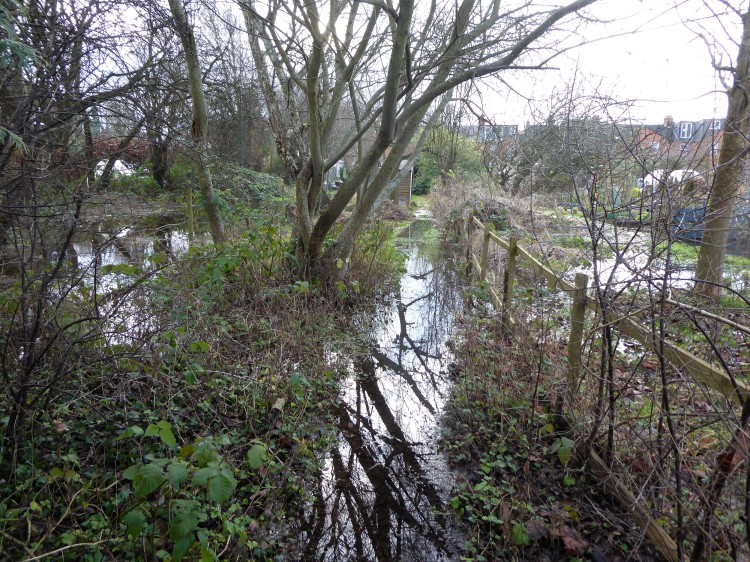 *‘Marsh’ tit is certainly appropriate at the moment, though by normal habitat association I agree that ‘wood tit’ would be a better name for the species.

**Which as a floodplain resident I entirely understand!