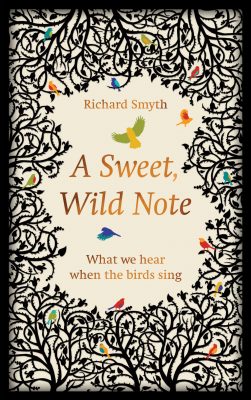 I’ve never found learning birdsong particularly difficult, though when I started birdwatching something over a decade ago I certainly spent a lot of time staring at a singing bush waiting for the songster to reveal itself and thus its identity. In 2011 I agreed to take on an MSc research project that involved surveying woodland birds by ear, and suddenly the need to be able to identify birdsong took on a fresh urgency. That spring I finally sorted out nuthatch trills, great tit improvisation and the perennially tricky blackcap vs. garden warbler* and now consider myself a passable bird listener, though my talents are as nothing to the true masters of the art. It’s a useful skill, whether for utilitarian purposes such as surveys or the mildly smug feeling of knowing something that many people don’t.

But as Richard Smyth shows in A Sweet, Wild Note, there are many more ways to listen to birdsong, as varied as the songs themselves and the experiences of their human audience. ‘Birdsong is a wonderfully malleable material’, as he puts it, beginning a learned yet lighthearted tour through poetic and other literary interpretations of birdsong stretching from Old Testament times to the present. These can be ecstatic, often metaphorical and sometimes stretch birdsong to the point of subversion—thinking particularly of how poetry ‘planted an English flag in the skylark’s song’ even though larks are equally likely to be singing over German or Spanish fields.

When not playing with birdsong as poetic raw material, human culture has tried to capture it altogether. Smyth takes us through the history of recorded birdsong and how this has fed back into culture through its use in music. A form of captured song that is perhaps less obvious to us today is the practice of caging birds and the surprising follow-on idea that birdsong’s natural state can be improved upon. Yet of course birdsong is, as Smyth writes, ‘tied in tightly with lots of other things—ideas of place, nature, of biophony … diminished when it’s made to stand alone.’ Today this is recognised by ecologists: for example, Smyth touches on Bernie Krause’s fascinating work on soundscape ecology and the acoustic niche hypothesis.

Ultimately birdsong is, together with other natural sounds, the sound of the landscape itself. It becomes for us ‘a means of orientation’, a phrase I particularly appreciated, thinking of how the sounds of birds bring up memories or impressions of particular places and times:

In this context, when we ask ‘what does the bird’s song mean?’ we don’t give an answer like ‘freedom’ or ‘exultation’ or challenge’; we might say ‘Wytham Woods in spring’ or ‘a saltmarsh in winter’, or ‘a seabird colony in the breeding season’. It’s about what it means to us.

As a self-confessed recent ‘birdsong sceptic’, Smyth has been accumulating his own meanings and shares them throughout. Though the experiences are his own, I recognised and enjoyed his delight at the mad beauty of blackcap song or the thrill of hearing your first turtle dove. The fact that one needs to seek out a first turtle dove at all is a good clue that all is not well in the world of birdsong, and Smyth does not shy away from talk of future silent springs. Even for those with no particular appreciation of birdsong, the idea of a world where the birds are silenced is probably an ominous one. Smyth points out that this is an effect exploited by filmmakers to induce a sense of threat, one in fact deployed pre-cinema by Thomas Hardy in Tess of the D’Urbervilles. He summarises the threats to songbirds with a single word: neglect. I think that’s a fair assessment, and his proposed solution of greater attentiveness captures well the starting place for all the best endeavours of human culture, whether poetic or scientific.

Smyth writes: ‘Birdsong … comes with baggage. But maybe we could work with that’. This brief yet comprehensive reflection on the meaning of birdsong works through baggage very well indeed. I would highly recommend it as a thoughtful, accessible and witty introduction to the world of birdsong and defy anybody who reads this book not to resolve to pay more attention themselves.

A Sweet, Wild Note: What we Hear When The Birds Sing is published today (April 13th) by Elliott & Thompson. Thanks to E&T for providing a review copy.

*When I say sorted out, that’s not to say we don’t all need our annual period of getting our ear in. That’s part of the charm of migrant songsters.

A few singing birds I’ve filmed in a very amateur way. Much better to go out and listen to the real thing!

Although my job is far from being a typical 9–5 office one, I am a rush-hour rail commuter. Bleary-eyed from an early start, I try to use the time well by reading a book, or watching the world rush by the window. Moments of beauty often surprise me: even a low forest of lights alongside railway sidings takes on a magical quality in the half-light.  Lately I’ve been concentrating on trying not to read the news, and scanning the blurred countryside for signs of hope. They’re getting hard to find, aren’t they? January is hard enough to get through, even without a daily bombardment of exceptionally bad tidings. I’m paralyzed, stuck between wanting to stay as informed as possible so that I might figure out something positive to do and simply retreating into my own little world.

Nature is no cure-all, but that’s where I tend to go for solace. Two birds in particular have been appearing faithfully on my journeys—one in the morning, one in the evening—gracing the day with a much-needed touch of wildness. First, a herring gull. A magnificent full-adult specimen see-sawing in a wide arc over the bus stops, showing off the length of its pale grey wings.  It carries with it a sense of adventure and a whiff of salt spray, for such a bird might also be seen patrolling a windswept fishing port on the North Sea coast.

At dusk a blackbird claims the town square as his own. In a few short notes all of spring comes pouring out, and I can feel it trying to break. Leafburst and catkins, crocuses and snowdrops, daffodils, lambs in the fields, more and more birds joining the chorus. Chattering passers-by and the low growl of buses and taxis fade into the background, and cease to matter.

We did finally see off January yesterday. The weather on the first day of February was mild and the dampness of the air smelled somehow sweeter. Insects could feel it, breaking cover into the sunlight, wings a frenzied blur. Black-headed gulls rode the breeze for the sheer hell of it, as far as we could make out. The blackbird abandoned a loftier perch, descended to the small trees in the square, and began to sing all the more loudly. Much cold weather may remain ahead and storms both political and meteorological loom on the horizon, but in that moment the year’s promise was already fulfilled in a bird’s song. It was all that mattered.

It’s dark for the earliest of my walks to the station this week, the air thick with drizzle. Redwing calls penetrate the murk, crisp against the relative hush of a suburban dawn. When I return, after dark, they’re passing overhead again. Piercing, descending, trailing off into the evening sky; their calls are a premonition of the screaming rockets that will fly similar paths over the gardens of Newbury on November 5th. If we didn’t already have a 400-year-old political justification for pyrocentric festivities at this time of year we’d have to invent one. It’s too perfect. In fact, the accelerating inferno of autumn racing around the hemisphere is surely more worthy of celebration in its own right.

In October, the whole year goes up in flames. Trees spontaneously combust, lit from within, their leaves darkening and blistering as though in a hot oven. When they finally fall they crackle underfoot, as pleasing a soundtrack as the thrushes overheard. Many plants are throwing energy into fruit, and it’s the smallest of these acidic beakfulls of sugar energy – haws, dogwood, rowan – that the redwings are here for. They’ll carry these digested embers back to Scandinavia, or Iceland: sparks to ignite the next generation of avian fireworks that will race across smoky October or November evenings in years to come.

I imagine the autumn harvest used to also sustain us in a fairly direct way. Our hedgerow plunderings are now just symbolically connected, at best, to the life-and-death foraging of birds, yet there’s something deeply sustaining about the taste of autumn fruits. They have an earthy, mineral sharpness detectable even when buried by the vats of sugar my 21st-century taste buds have grown accustomed to. The body could well live by supermarket alone, but my spirit seems to be lifted by food more directly acquired from nature. Perhaps I’m looking for a tangible connection to the redwings: their lives may objectively be much harder than ours, but in the wildness of that call I hear a freedom, born in the heat of autumn, that feels utterly out of reach.