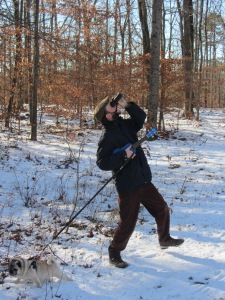 It’s refreshing, getting back to my roots as a naturalist. Feathered, flying roots. December, the continent of North America. Not only are precious few insects on the wing or plants in flower, but I wouldn’t have the first clue what many of them are either. Like a Christmas present from nature to me, for the next two weeks I get to concentrate on birds.

By the end of this trip I’ll have spent about six months of my birding life in North America, out of a total of around eight years. Long enough to have familiarised myself with most of the common species, but not so long that I’ve ever been even remotely tempted to embark on a twitch in order to add to my modest life list for the continent.

Thinking that I must as a result still be missing some ‘obvious’ birds, I spent a pleasant half hour spent skimming eBird (the US equivalent to BirdTrack) checklists for the areas in which we spend the most time, in conjunction with my own life list. And here is what I came up with. Take note, Birding Santa: these are all I want for Christmas! Those I’ve seen in the UK are marked with an asterisk, and I’ve ‘translated’ the names in brackets for the benefit of my fellow English birders.

The first five species are fairly regularly reported hereabouts through December, though how I go about tracking them down is still something of a mystery:

And the next group are ‘maybe’ birds, meaning either that they’re species less commonly reported or ones I assume will be quite difficult to see, but, on the whole, they’re birds which ought to be present in at least one of the places we’ll be visiting on this trip.

Then, there’s a wild card. For this magnificent denizen of the frozen north – now heading south in incredible numbers – I think a twitch might finally be on the cards:

How many of these birds do I expect to see? Oh, somewhere between one and none. But it will be fun trying. And isn’t having fun the point of birding, in the end?