I first became aware of the existence of the ivy bee (Colletes hederae) last autumn, and have wanted to see one ever since. I can’t exactly say why, except that the idea of them is nice, being a bee that is both easy to recognise – a gingery-stripy flying humbug – and biologically interesting, since it was only discovered in Britain in 2001 (and indeed was new to science as recently as 1993, when it was split from a close relative).

As their name suggests, ivy bees time their emergence such that they are active around the time that ivy is in flower, in other words from late summer through until late autumn. The last time those months came around I didn’t try particularly hard to find any buzzing humbugs, besides taking a cursory look at a few good patches of ivy. This year, perhaps in part because I fancied restoring a bit of bee enthusiasm to my wildlife year – it usually wanes by mid-summer – I  hit September more determined, to the extent that I seriously considered ‘twitching’ a colony up in Oxfordshire.

But there was no need. Regular reports of ivy bees feeding on yellow Asteracea flowers – apparently their second favourite food – started to come in from surveyors on the Reading Urban Pollinators project, raising the hope that hederae was possibly quite common in suburban Reading. Sure enough, when the ivy hedges dotted along my walk to campus finally flowered, they were soon being visited by a very smart, very sweet little ginger bee. 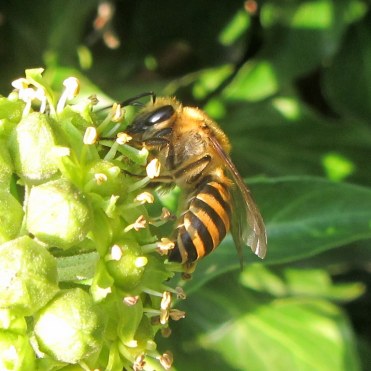 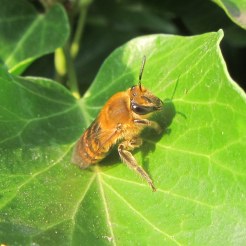 The next step will be to get an idea of where the nest colony might be. Most likely it will be in somebody’s garden – gardens providing the majority of homes to wildlife hereabouts – and there’s some nice advice on how to encourage ivy bees in your own garden on the Reading Urban Pollinators Project blog. I’m also not sure to what extent ivy bees are now common in Earley, whether they are already ubiquitous or only foraging quite close to where I found them. I’ve had no luck so far locating any in the ivy around Maiden Erleigh Lake, or on Whiteknights campus.

However localised they are, this is a lovely illustration of the beauty of taking an interest in bug-life, especially for a lister like me. Lifers on your doorstep, lifers in the hedge on the way to work, lifers found idly trundling across the floor of a teaching lab (no, really!), or lurking in a bag full of foraged elderberries. And not only are the listing possibilities good – very good, but not really of use to anybody but my own rather peculiar ego – there’s a much greater chance of making a scientifically useful discovery with insects than there is with birds.

Yet I remain, at heart, a birder. Cut me open* and I expect you’d find the word ‘birder’ running through me, as though I were some sort of vaguely animated, binocular-toting stick of rock. And as easy as birds are to see in the course of everyday life, for us birders that simply isn’t enough. To bird is an active thing; it is a state we enter in which cares and worries are set aside and birds, and their pursuit, take precedent. Such focus requires time, and finding time requires good excuses, especially when other facets of life are conspiring to become alarmingly busy all at once.

Fortunately, birding salvation is at hand. My very good friend ‘the Ricebirder’ is back in the country on a brief sojourn from his current home in the Philippines. Where, as you might imagine, he has been quite deprived of ornithological excitement. After all, the Philippines’ 7107 islands can only boast about 600 species, of which a mere 200 or so are endemic. How he must have missed blackbirds, blue tits, dunnocks, robins and woodpigeons! I feel duty-bound to see that he receives his fill over the next few mornings, so at last I have my excuse. Hang a sign on my office door: I’m going birding!

Seen an ivy bee? Report it to BWARS and help track their spread throughout Britian.

My thanks to Richard Comont, entomologist extraordinaire and provider of ivy bee tips and tip-offs, and to the Ricebirder (whose real identity I have temporarily been asked to withhold!), peerless birding companion past, present, and future. With insect lore whispered in one ear and admonishments to keep on birding in the other, the two R’s between them help ensure that I continue to strike a balance between entomological and ornithological fields of endeavour. But which is the angel and which the demon? I couldn’t possibly say!

3 thoughts on “The Bees and the Birds”