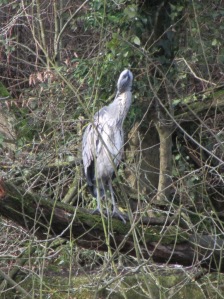 By the lake corner a nuthatch was tweeting away – yes, nuthatches do actually say ‘tweet’, if you hadn’t noticed – defending a favoured tree, whilst on the water the ever-hungry fleet of marauding mallards kept an eye out for bread-wielding toddlers. A heron which has been hanging about the lake’s central island for most of the week was for some reason playing a solo game of pick-up-sticks. Approaching the park’s far edge, I could hear two or three great tits stepping on squeaky bicycle pumps – that is to say, singing – as robins dashed on and off the path in search of a morsel or two. I stepped round the corner onto Beech Lane at the same moment a great-spotted woodpecker chose to bounce dramatically across the road and over my head, its red undertail leaving a trail like a firework against a blue-grey sky. That same moment I realised I was grinning from ear to ear, buoyed by nothing more than the life of a few common birds.

Yesterday afternoon I was counting gulls* on the playing fields behind my house – very meditative – when four red kites approached over the copse to the east. Careening against the wind they swooped low over the open grass, each bird losing height rapidly with just one deft flick of a wing. They appeared to be investigating a broken-off branch which I had earlier briefly mistaken for a dead squirrel, though I’m sure kites are more intelligent than that. It’s hard to dispel the notion that at times, they simply fly that way because they can, for the sheer joy of it. And the feeling rose up in me, too, a black-ish mood lifted on the turn of a raptor’s tail.

Suburban Reading is busy, and sometimes crude, and dirty, and crowded. And not the obvious first choice for a wilderness adventure, despite the presence of a ‘Wilderness Road’ and indeed ‘The Wilderness’ (the woods on the south east side of the university campus). It’s by no means the worst place in the world but not all that inspiring, either. The birds, however, are always out and about here, seeming to have a better handle on how to live in this townscape than the humans who built it.

Sometimes it’s easy to get wrapped up in making clever arguments about ecosystem services and environmental sustainability, and there’s nothing wrong with such tactics, especially when trying to persuade the apparently soulless apparatchiks in Westminster to part with a little cash. But for those of us who got into conservation simply because we love birds, there’s a much simpler case to be made for protecting them: they put a great big smile on our faces. Something we all need, from time to time.

*66 black-headed, two common. Just in case you were interested.